How to differentiate between Past tense and Past Participle? 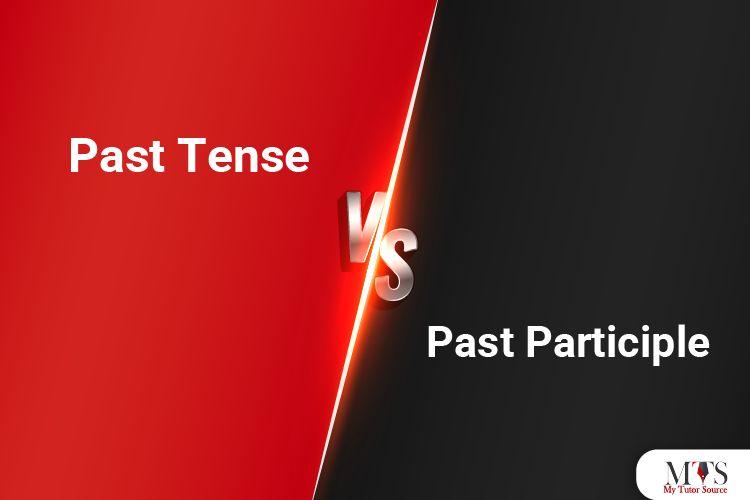 In the English language, we often add time in tenses to describe the event that is happening, has happened, or will be happening in the future. In this way, we get three main forms of tenses, i.e., present tense, past tense, and future tense. Here we have discussed different aspects of past tense and how it differs from the past participle.

Read and learn about how these differences impact sentences and the way you use them from our private tutors.

In English, we use the verbs in different forms to state the time of different actions that are happening or happened. One single verb can be changed to demonstrate different times. Let’s take a look at this with an example of three types of tenses.

In this way, the verb was changed to three different forms, stating three times related to the action of writing.

Let’s discuss different aspects of the past tense.

When the form of a verb in tenses is used to describe an action, a situation, or any event that has happened already in the past is referred to as past tense. Usually, the suffix ed is added to the present form of the verb, which turns it into past tense.

Usually, the past tense is used in four different types, as discussed below:

Simple past is used to simply state the event or action that has happened in the past. However, the ed suffix is added to the form of the verb to turn it into simple past tense. There are some verbs like put or set that do not change to any form, thus remain the same.

For example:I worked for an estate agent last year.She cut the cake yesterday.

This is the type of past tense that is used to describe an event that has happened in the past, and it is also ongoing. For this purpose, usually, the form of a verb, i.e., Was/Were, is used with the verb with suffix, ing.

For example:He was drinking coffee upstairs.I was reading my novel when she called me downstairs.

For example:I had gone to the bookstore before I came home.She had saved money for buying the car.

This is the type of past tense that is used to describe an event or action that happened in the past before another event stopped it. In other words, when one past event is interrupted by another, then we describe it by the use of this type of past tense.

For example:I had been cleaning the pool since morning.She had been roaming in the street for two hours.

As we have discussed the detailed aspects related to the past tense, let’s discuss past participles now.

The past participle is basically the form of the verb that has suffix ed added to it, and it is used to describe an event that has happened in the past.

We usually add the word “ed” after the verb when we are writing past participles. For example, they screamed.

In this way, the words turned into simple past tense verbs and the past participle.

For example:He has gone to the schoolI have

Difference between Past Tense and Past Participle

The mixing up of the past tense and participle can sometimes go unnoticed by people because they tend to ignore the form of a verb that should be rightly used.

When we add a past participle to a sentence, we use a helping verb along with it, and in the past tense, we can simply write the form of the verb without any helping verb, as shown in the following examples.

We use tenses to describe a certain event that has either happened, is happening, or will be happening. In this way, there are three main tenses that are past, present, and future, respectively. On the other hand, we have past participle that is a form of the verb used with another helping verb to form up certain tenses. The past participle is also used as an adjective sometimes.

Learn all about the tenses and their usage from our expert and certified private English tutors.

The Reason Behind Why the Moon’s Far Side More Cratered Than Its Nearside: Mystery Solved!

A Short Letter to My Favorite Teacher

How To Develop Your Female Students’ Interest in STEM Subjects: 6 Ways!

What Will Happen if the Moon Disappears?