Properties of Right-Angle Triangle and How to Apply Pythagorean Theorem 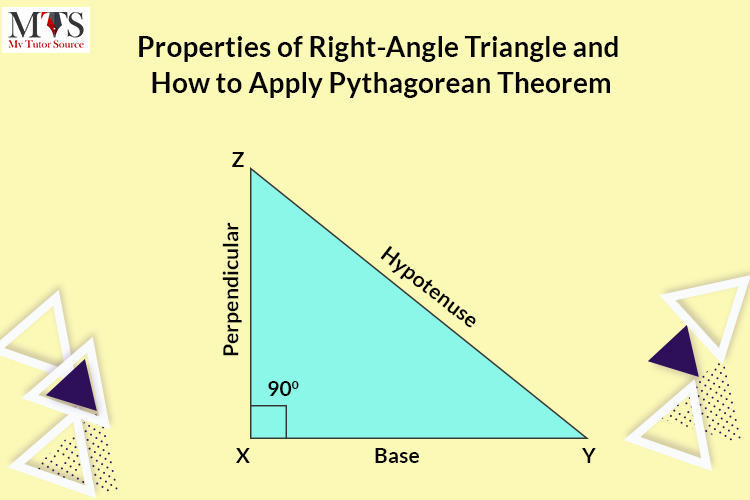 Different types of angles are used in a geometry class for measurements like acute angle, right angle, and obtuse angle. But the Right Angle is the most used in trigonometry. Let’s learn about the right angle in detail.

What is a right angle triangle?

90 degrees makes a right angle, and any triangle that contains a 90-degree angle is known as a right-angle triangle.

Hypotenuse of a right-angled triangle

If you ever get a question in an exam that asks you to calculate the hypotenuse of a triangle. For example, a triangle has two sides, a and b, and a hypotenuse c, and then you have to apply the Pythagorean Theorem to solve it.

How to apply Pythagorean Theorem

Around 500 BC, a well-known Greek Mathematician philosopher named Pythagoras developed the Pythagorean theorem.

The Pythagorean Theorem is stated as:

If the length of two sides of a triangle is given, we can easily find the hypotenuse length of a right-angle triangle. Let’s see an example to understand the concept of theorem better.

A triangle has three sides x, y, and z. if the length of x is 4 and y is 3, then what will the value of z? Find its hypotenuse.

Take square root on both sides.

Hence the length of the third side of the right-angle triangle is 5.

This is how we find the Hypotenuse of the right-angle triangle using the Pythagorean theorem. If you practice enough, you can confidently apply this theorem and know how to find the third side of any triangle. However, trigonometry has more advanced functions and theorems to calculate the sides of right-angle triangles and other non-right angles.

Right angles are used everywhere. You can easily recognize them around you in real-life objects and applications like your side table and signs on the roads. If you become an expert in applying and solving the Pythagorean theorem, you will know the importance and usage of right angles besides geometry or trigonometry.

How To Stick to an Exam Preparation Schedule

How To Become a Straight-A Student: Tips & Steps

How to be an English Tutor